The Ultimate Collection of Quotes About Startups

This page contains our collection of quotes about startups. We have chosen them in the hope that they are useful for founders, rather than witty or aphorism-like.

We have edited many of the quotes to make them more understandable now they are removed from the context in which they were written or spoken.

Sam Altman is a co-founder of Loopt, venture investor and president of Y Combinator. He writes a blog at Posthaven.

If you’re just starting out, take the time to build a product your users love, no matter how long it takes.

In the beginning of a company, there is no management. This actually works really well.

Before product market fit, the only job that matters is to build a great product.

Some Tips for Startup Founders

I recently started to collect quotes about startups. While doing so, I realised that it would be quite fun to write down some of my own observations as well. However, it seemed a little irreverent to include my name among such well-known ones as Steve Blank and Paul Graham, so I decided to publish my thoughts separately.

Of course, these observations are drawn from my own experience, which is neither Silicon Valley nor a high-octane accelerator, but as a professor in Germany who has a small innovation consulting company, teaches entrepreneurship classes at university and occasionally coaches startups.

This post is a work in progress with no finishing deadline; I will continue to add observations as they occur to me.

Founders need to make mistakes as quickly as possible whereas bureaucrats want to avoid making even one mistake. So, when they are under pressure, startups will speed up and bureaucrats will do nothing. Therefore, founders should not allow themselves to become dependent on bureaucrats. 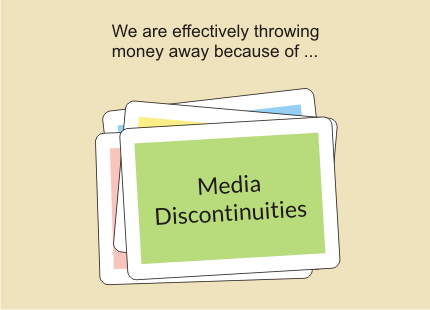 One of the keys to profitability with established products is improving the efficiency of core processes. This may mean either increasing productivity or reducing costs, or both of these. For this reason, one of the classic tasks for an idea production and evaluation consultancy like Zephram is to help clients identify such opportunities.

One tool which we like to use for developing cost reduction ideas is a set of flashcards, each of which names a potential source of process inefficiency. There are thirty flashcards in total, derived from different knowledge sources including both our own experience and standard approaches such as the lean production movement.

The first five cards in the deck are:

My Horse Wants You to Dismantle Your Car

One of the problems we regularly face in innovation projects is our clients‘ resistance to their own best ideas. We have already quoted a number of sources in this blog, including the Italian Renaissance philosopher Machiavelli, the American journalist Jessica Livingston and the British Science Fiction author Arthur C. Clarke.

One of the most extreme examples of resistance to innovation that I know is from early twentieth century America, when automobiles were gradually replacing horse-drawn vehicles. The Farmers‘ Anti-Automobile Society of Pennsylvania drew up the following series of rules for car drivers:

You would think it was obvious … 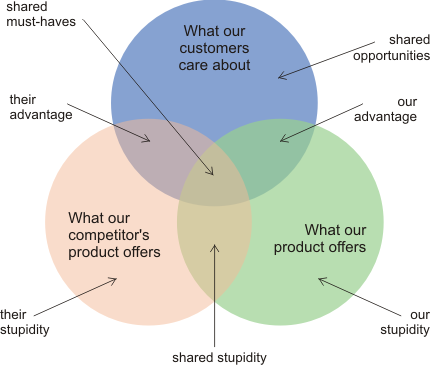 When advising companies and startups about planned new products, we often find ourselves repeating the same basic advice. This motivated us to develop the diagram shown above, which shows

as well as the various overlaps between them.

Each of the resulting seven areas has its own interpretation with regard to planned or actual product features:

The Four Knowledge Paths to Innovation 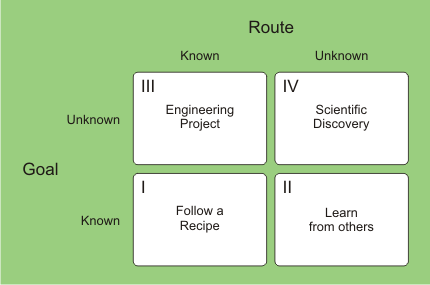 Discovery-driven innovation processes such as Lean Startup and Hypothesis-Driven Entrepreneurship are currently very much en vogue. They aim to solve the problem of reducing the uncertainty involved in developing successful new-to-the-world offers. In order to better understand the importance of discovery-driven innovation and how it compares to other types, we have developed the matrix shown above.

The matrix distinguishes between the innovation goal and the route needed to achieve that goal, each of which can be either known or unknown. The resulting 2×2 structure yields four quadrants, each of which represents a different type of innovation project.