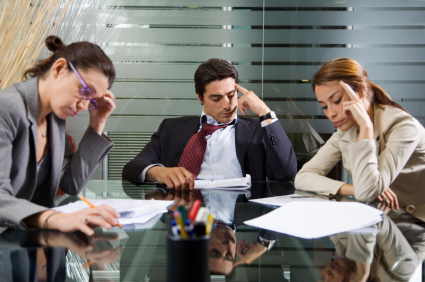 Brainstorming is probably the most widely used method for generating ideas in the world today. However, almost always, it is either very inefficient or doesn’t yield any useful results at all. The success rate (the proportion of ideas produced that are classified as „good“) of brainstorming sessions is variously quoted as being between 0.1% and 1%. In one article which appeared in the German magazine Brand Eins, an ideation workshop yielded only one or two good ideas out of a total of 1500! Not surprisingly, Brainstorming has developed a bad reputation, and the announcement of a corporate „creative workshop“ is often met with scepticism and resistance.

So why don’t Brainstorming and its many variants work? The reason is simple: because they don’t provide the participants with any means to overcome their mental obstacles to generating new ideas. Without such help, participants can only (re)produce the ideas that they already had in their heads anyway before they entered the room.

To understand these mental obstacles, we need to know that our minds store concepts in a network similar to a network of friends and acquaintances. Concepts which have meaningful relationships are connected to each other by a link, whereas concepts that are not related can only be accessed by traversing the sequence of intermediate concepts like in the game „Six Degrees of Kevin Bacon“.

There are two mental obstacles to creating ideas: Cognitive Immobility and Occupational Blindness.

Cognitive Immobility essentially means that as soon as you form a concept of your ideation task, the only concepts you can directly access are those to which to which it is directly linked. These will, however, not yield new ideas. In fact, good ideas are to be found by unexpected combinations of the given situation with distant concepts. For example, the parking assistant to be found in many cars was invented by imitating how bats use ultrasound to navigate at night. „Bats“ are almost certainly a long way away from „automobiles“ in everybody’s cognitive networks.

Occupational blindness means that we are so used to the relationships between concepts, that we are unable to conceive of „alternative worlds“ in which these relationships do not hold. However, innovative ideas are often obtained by breaking assumptions about familiar things and being able to see them in a new way. For example, leasing could only be invented by breaking free from the assumption that having the use of expensive equipment is necessarily preceded by a lump-sum purchase.

For this reason, no ideation workshop should use brainstorming (except perhaps as a warming-up exercise to get existing ideas out of people’s heads.) Professional providers of high-quality ideation services will delve deeply into the problem to be solved and devise a set of questions that are designed to overcome Cognitive Immobility and Occupational Blindness. One result of this intensive preparation is a vastly improved success rate with the ideas obtained: In our experience, the quotient of good ideas is always at least 10%, which is a factor of 10 to 100 better than using Brainstorming! The corresponding savings in time and effort are significant – not to mention the indirect benefits obtained from the feelings of achievement and contribution experienced by participants.